Posted by author on April 17, 2018
in Uncategorized

In a similar way to yoga which has the seven chakras, Ancient Egyptians believed in energy centers that could be harnessed for better well-being and longevity. By harnessing the energy centers, through the system of Alkhemi Sekhem, you can promote self-healing through the path of enlightened spirituality.

To the Egyptians, everything was sacred, from the surrounding animals, waters and plant life, to the earth they lived on. The Earth and all that resided within was a living symbol of the inner spiritual world to them, and they idolized it, through their artifacts and how they lived their lives.

Their existence served a specific purpose, they were on a quest to align the physical world with its divine source. In order to accomplish this, they created relationships with their own deities, and took an approach to life that they called “the intelligence of the heart.”

These beliefs, at their core, are thought to have healing powers and can be used today to help anyone who is in need of some spiritual growth, guidance, and empowerment.

The Two Principles of Alkhemi Sekhem

The energy that can be harnessed is unlimited and is done through natural means. Your hands draw the energy in, which flows through your body-field and can then be focused on a direct person or object. In order to access the energy, you need two things: intentions and symbols (hieroglyphics). Higher frequencies of energy raise the overall vibration levels in the body-field, thus replenishing lower energy levels more quickly.

Certain Egyptian symbols, beliefs, and deities connect to specific vibration center or zone. By directing energy to the centers, through the body-field, you can balance your mind, body, and spirit and provide each with healing properties.

How to Connect to the Energy Centers?

Many often connect to one or more of the centers on intuition alone. We feel as though something is off, we have a headache perhaps, and we know intuitively to lie down and rest. Another way to connect is more intentional and can be done through a variety of approaches: meditation, shamanic journeying, sacred rituals and dance, prayer, yoga, healing crystals and aromatic oils. 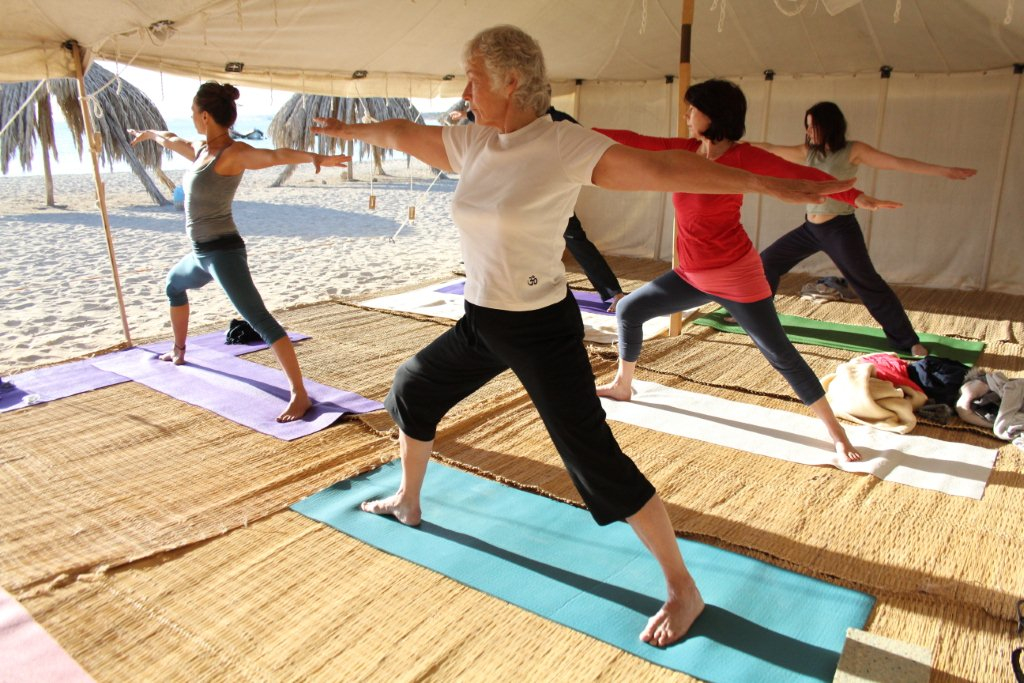 There are nine primary energy centers, each one relates to a specific Egyptian God or Goddess, a stone, an essence, and the resulting process. The first five begin above the crown of the head, where the spiritual entity begins and works its way to the heart of the body.

The next set of four starts at the upper abdomen and works its way down through to the earth, beyond where the physical entity ends. Harmony and Balance, although not actually a primary, are included in the chart since this zone is relevant to our entire system; it is located in the two hands of our body.

There are also eight secondary centers, which alternate between the primary down the entire physical entity or body.

Alkhemi yoga works together with the energy centers allowing for the body to become balanced and energized. The yoga fusion typically can include one of the following: Sun Sequence, Earth Sequence, Hathor Sequence, or even the Nine Centers Sequence, which uses all of the nine primary energy centers. Other techniques such as dance, relaxation or meditation are also used to help one gain all the benefits from this ancient Egyptian healing. Harness your energy and healing power through the practice of Alkemi Sekhem and perhaps you will be able to achieve the level of enlightenment the Ancient Egyptians once did.

More from my site

... other posts by author

Error type: "Forbidden". Error message: "The request cannot be completed because you have exceeded your quota." Domain: "youtube.quota". Reason: "quotaExceeded".

Did you added your own Google API key? Look at the help.

Check in YouTube if the id yogawithadriene belongs to a username. Check the FAQ of the plugin or send error messages to support.